Inspired by the diverse and exciting social life on Kolkatas pavements (which is very much owed the cultural practise of the Hawkers, who occupy it), I decided to do a project in the streets. I picked up my concept of Monodosis, which is a research on musical form and converted it into an urban space intervention.

My intention was to use Monodosis as a kind of performative plug-in in the city, that at the same time reacts to the specific situation as well as provoking  interaction with the everyday pedestrians and hawkers.

How is that done? Very simple: a solo improvising vibraphone meets urban space production. From that point on, cultural practise starts to work in various dimensions. A performative research on form, material, energy and transformation emerges.

Since we chose ten locations, scouted by Patrick Ghose, the project could also be interpreted as a portrait of Kolkata: it works in different spaces, different levels of society, different economic layers. Even the instrument I use is Kolkata-specific: it is the only vibraphone in the city. In the 50s it was brought in by Victor Feldman (who later became pianist with Miles Davis) and given to Antonio Menezes, a protagonist of the then thriving Calcutta jazz scene of the 50s, 60s and early 70s. He later constructed a frame for the instrument, enabling him to carry it around more easily. This effect came in very handy for our endeavor, in fact.

While making the project, we realized that it works on many different levels. Since my way to play is very different to the culture of Kolkata, we observed an alienation effect, that opened up experience. People could react directly to the musical performance whithout having to label it. The reactions could vary from nodding the head in the rhythm of the music, to video the performance with a handy, to asking questions on the performance, to telling friends what is happing or just passing by, ignoring what is happening.

After each performance a dialogue with the audience unfolded. The question that came up the most was: Why do you do this? What is your aim? And while this question is asked, the answer is already given. The intention of Kolkata Monodosis is to raise questions on todays practise, use of urban space. To ask what is formal what is informal, what is use or misuse, what is public and non-public and so on. So with this project I want to expand creativity, allowing space for alternate perspectives on and readings of the urban. Perspectives that drive beyond the mere application of forms but intends to encourage the reflection on how and why forms are created.

In that way Monodosis becomes a kind of performative meta-practise that puts improvisation into the focus. Improvisation as interaction in real-time, as constructive use of disorder in a transforming community. As Joseph Beuys expanded the notion of fine arts to arrive at the „soziale Plastik“, the Kolkata Monodosis project could stand for an ‚expanded’ way to interpret musical practise. By widening the aspects of music in this project, we arrive at a social technology that I woul like to call improvisation technology.

Improvisation technology is about organisation of space in time, it is about using economy not as a given but as an asset. It strives to enable to perform, to inform and to provoke reflection on form. I hope that Improvisation Technology can open new ways of reading and appropriating urban space in the future.

Once we started the project, everybody got deeply involved in the process of the making.

Producing the film with Ranu Gosh, Patrick Ghose and Rajak A. is thus not merely to be seen as a 1 to1 capturing of the street intervention.

The cooperation of the film team is a creative interdisciplinary process in itself, that on a meta-productionlevel stands for an artistic endeavor of finding an experimental form of and for its own. In this way it is opening yet another level, another dimension of possibilities for interpretations, readings of the totality of the project.

complementary text “Everything Falls Into Place” by Patrick Ghose 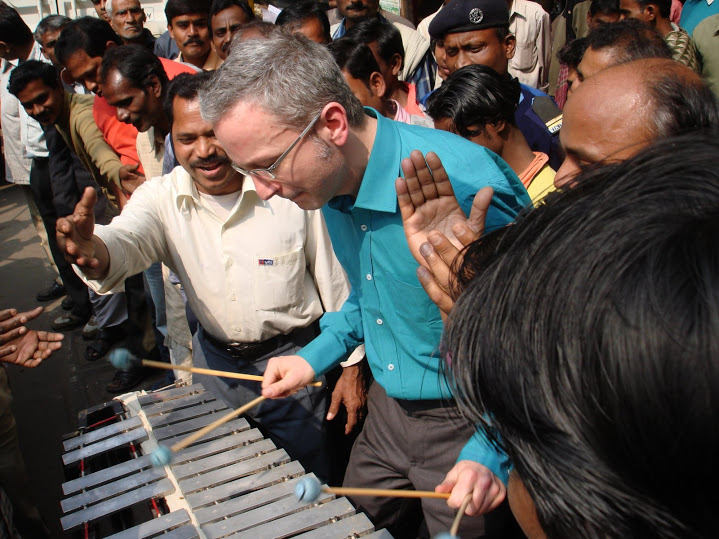