Poppenbüttel hilft e.V. together with the research and teaching programme Urban Design and the Chair of Architectural Design and Building Theory at HCU Hamburg invite to the summer school and Design-Build competition »Building a Proposition for Future Activities«. The summer school will take place from the 12th to the 24th of September 2016 and has one objective, realised in three takes: 1) working on design-build proposals for the community building, 2) the construction and organisation of the first International Mini Golf Grand Prix and 3) constructing a prototype for an architecture in and from within which new modes of futurity can be practiced.

By early summer 2017 the newly constructed refugee accommodation located at Poppenbütteler Berg/Ohlendieck, Hamburg, will house between 300 and 650 people (the exact number still being subject to intense contestation) seeking protection from war, violence and lacking economic prospects in their home country. The site is part of the programme ‘dwelling in perspective’ (Flüchtlingsunterkünfte mit der Perspektive Wohnen) with which Hamburg’s senate reacts to the influx of refugees in late 2015 to develop and build new neighbourhoods within one year. 4.800 dwelling units (subsidised housing) in solid (as opposed to temporary) buildings will offer the perspective of dwelling (habiter) not only to refugees in the medium to long term. Due to legal reasons refugees can only be accommodated during the first phase which means that no other usages than sleeping and storing are allowed. The units will be planned and built in accordance with the standard of social housing and procedurally transferred from the initial use as refugee accommodation into a public housing programme. To overcome the mere objective of accommodating (housing question), which excludes being active, we want to introduce the urban question into the discussion of planning. Since the public release of this project in a town meeting in mid 2015, civil society organization Poppenbüttel hilft e.V. is marching through the institutions to argue for an architecture in and from within which new modes of futurity can be practiced.

Design-build proves to be a productive approach to the question of how we – as students and professionals in intervention oriented fields – can materialise the change we promote. The programme is set up so as to allow participants and an interested public to become acquainted with different aspects of being active and encountering future neighbours in follow-up accommodations for refugees. The programme will feature public lectures, debates and open workshops. In addition to these students will prepare an on-site library and a summer school reader comprising the current state of research on the issues of accommodation, dwelling, being active, intercultural practice, immigrant & refugee studies, to be continued. 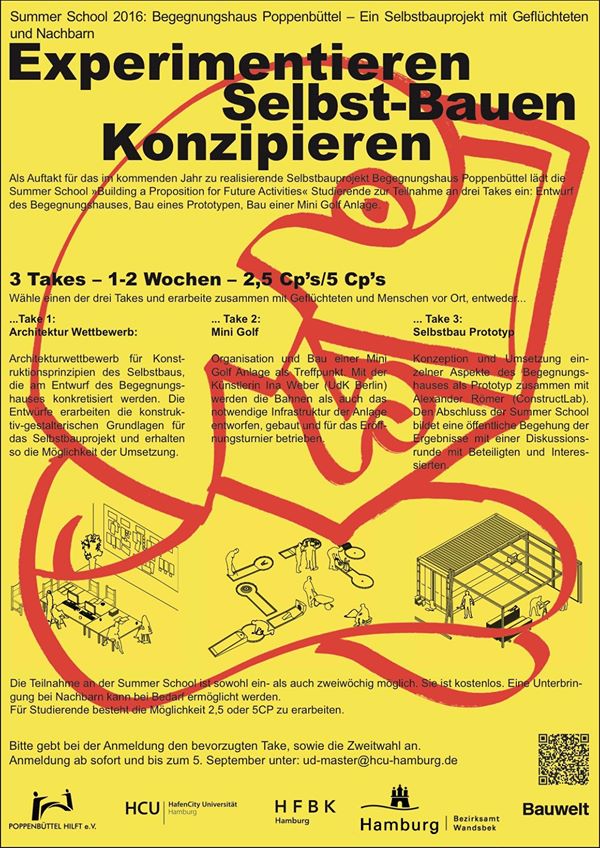 Homestay
To become acquainted with current and future activities in the neighbourhood of Poppenbüttel participants will find free accommodation with members of Poppenbüttel hilft e.V.

Prerequisites
Embodied skills and know-why in all stages of building and design processes are welcome. The workshop will be held in English and German. The organizing committee is working on finding translators to allow all participants, refugees in particular, to fully understand the workshop issues at hand in order to be able to actively participate.
If available, students are asked to bring construction site equipment such as protective shoes and gear.
To earn credits students must actively participate in the summer school activities and hand in a documentation of their work by September 30th. The final results will be presented at the public closing ceremony on September 24th. We ask international students to provide us with all necessary paperwork so we can transfer credit points within the ECTS system. Participants can earn 5CP, 2.5 CP respectively.

Take 1
In order to activate the planning void between the new and the existing neighbourhood we seek to create a place that spatialises the requirements and activities of future inhabitants and users. As encounters are produced by becoming active and vice versa, the emerging place needs to enable people to become active so as to encounter each other. It will also need to be a place where they can encounter each other in order to become active. This holds for the built object as well as for the planning and construction process of the facility that will be realised through self-construction. The place requires the necessary flexibility to allow and provide for future and changing needs.
Teams of two to four people will be formed on-site. Rather than competition-driven, the working teams are expected to exchange ideas and contribute to the overall objective. ‘New ideas do not emerge out of the competition between individuals and organisations, but through their openness and connectivity. Ethnographic research on scientific practices has shown just how meaningless the notion of the solitary and ingenious researcher is: breakthroughs happen when scientists get together, share their experiences and discuss their results together. Genius is something that emerges from within a group of people who assemble around a table.’ (Terkessidis 2015: 119)
Usage
The summer school follows a holistic approach and thus does not prescribe one particular usage or theme. Instead, the concept for possible uses will be developed through exchanges with refugees and neighbours over the course of the summer school. What kinds of activities and actions could emerge to be spatialised in the community building? At the same time, the concept and construction of the place shall remain open so as to enable future usages to change the spatial arrangements. We refrain from assumptions regarding the usages and users and instead seek to collaboratively work out the uses together with the neighbours and refugees.
Building matters – hard facts
The construction site of the community building covers an area of max. 400sqm with a height of max. 10m including external structural installations (e.g. terraces etc.). The objective is to create an architecture that allows for appropriation, transformation and extensions. The starting point is a reinforced base plate that will be provided in the course of the construction of the accommodation and will include connection points for water, sewage, electricity and heating. We seek to realise the building via self-construction (see below under Construction). The numbers of storeys need not be confined to a single storey, if a second storey or a roof terrace are considered however, these will need to be accessible.
Construction
The base plate with connection points for water, sewage, electricity and heating will be provided. Any further built structures will be developed via self-construction. Self-construction processes offer opportunities to take individual and communal decisions and cater to requirements and usages of the group. The summer school itself is the initial location for encounters out of which the concept for the community building will be developed on site and together with the neighbourhood. The process of encountering others will commence before the actual building process. Depending on the specific concept the group will need to negotiate which particular construction works will possibly be allocated to contracted professionals. This entails requirements for the planning process regarding implementation and building instructions as well as for those involved on site (e.g. BeL, Sozietät für Architektur, Grundbau und Siedler).
Contribution and Output
The following outputs and contributions are expected to be presented at the closing ceremony of the summer school (24th September 2016): a concept for an extendable building, common and transformable usages and operators, a concept for the self build construction and its materialisation, site plan, floorplan(s) 1:100, section(s) 1:100, isometric drawing(s)/elevation 1:100, a description of the construction process in its main phases (including (isometric) drawings), model 1:50

Take 2
Take 2 is to construct and organise the First International Mini Golf Grand Prix.
The First International Mini Golf Grand Prix Poppenbüttel was presented as an idea in response to the research question of how future forms of being active and encountering neighbours can look like in the area of Poppenbüttel. A group of students in the intercultural practice seminars »Community Building Poppenbüttel 43« and »Agency Agency« – held as elective courses for international students and refugees part of the guest student programme of Hamburg’s state universities in the curriculum of the research and teaching programme Urban Design at HafenCity University, Hamburg – performed research on the typology of places of encounters in the area of Poppenbüttel. The golf club close to the future refugee accommodation serves as a prototype here: A place where leisure and sport are paramount, the golf club is also a place of work, of business, of negotiations, in short, a place of being active. The group of students together with members of the initiative Poppenbüttel hilft e.V. expressed the motif of building a place in the follow-up accommodation where designing, constructing and using a place are understood as practices of encountering difference. Mini Golf gives this motif scope and traction in the context of Poppenbüttel.
The realisation of the project(s) itself presents opportunities for designers to foster future forms of being active that conversely manifest as challenges or efforts to overcome obstructions. Participants together with members of the civil society initiative Poppenbüttel hilft e.V. and guided by a professional self-construction manager and art director will build the event parallel to the mini golf course. The public closing ceremony of Take 1 and 3 will also mark the opening day/night of the First International Mini Golf Grand Prix in Poppenbüttel (Take 2).

Take 3
We approach Take 3 – constructing a prototype for an architecture in and from within which new modes of futurity can be practiced – by way of construction methods and materials. In a group research effort during the first three days of the summer school participants will assemble in-depth know-how and know-why of self-construction. In Take 3 participants will extend this knowledge into space and time by actually constructing model structures in a 1:1 scale together with Alexander Römer from Construct Lab, Berlin.
The construction site of the refugee accommodation offers two information containers. This situation will be the starting point for all model building efforts. Participants will set up (a work)shop, transform and extend these containers in the process of the summer school according to the objective/motif of the summer school. The summer school focuses on the ‘doing-ness’ aspects so as to gain information on what and how to build – action is the form