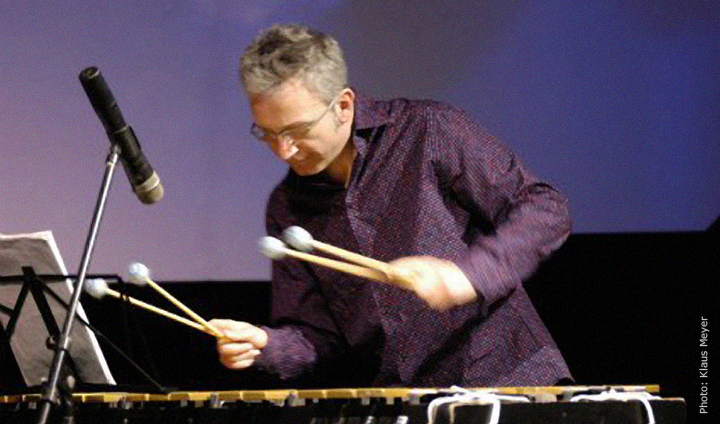 Monodosis is the solo program of Christopher Dell. The program is a catapult for diagrammatic real-time composition incorporating structured time-frames. It constitutes and propels a deep research into the potentialities and plasticities of rhythmic, harmonic and melodic practise. As soloist Dell has developed a highly remarkable and individual voice on the vibraphone. In his playing body intensity meets structural complexity. Uli Olshausen described Dell in the Frankfurter Allgemeine Zeitung in January 2015 as the „outstanding vibraphone player in the history of european jazz.“

As solo format, the Monodosis can appear – and has appeared over the years – in manifold forms such as live performance, recording, or performance lecture. In the oeuvre of Dell, Monodosis functions as a catapult for processes of real-time composition on solo vibraphone. The program constitutes research into the possibilities of rhythmic, harmonic, and melodic practice. This research has been carried out since 2002.

After recording the CD Monodosis in the year 2005, Monodosis II is now the second recorded and published CD of the program. When Dell recorded Monodosis ten years ago, it was the second solo recording in his career. The first solo recording he did in 1996, performing Kartenspiele, a series of solo compositions by the German composer Barbara Heller. Regarding his own compositional work, Dell was long hesitant to record a solo program. He simply didn’t feel ready. It took until 2005 before he was conceptually prepared to record Monodosis. The formal concept that he came up with for this program is based on a structural blocking system of musical units, the Fonds. A Fond contains three categorial aspects: firstly, it is a formal block of a certain number of minutes (the recordings Monodosis and Monodosis II make serial use of restricted minute-formats such as 20 or 3 minutes respectively) ; secondly, it is a frame of time; thirdly, it is a structure in that it constitutes a serial musical unit in the program itself. In total, the program Monodosis consists of an ordering of Fonds in a series of formal blocks scaled in time. Functioning as serial units, the Fonds provide the formal foundation for the musical action, opening up possibilities of experience and appropriation for the player.

Conceptually, the term Fond represents the basic form of encounter with materials. In this sense the title makes reference to Joseph Beuys, who described his work series Fond as batteries that can store and transmit energy and heat. Beuys used the title Fond II in 1968 for an environment installation featuring two tables covered with sheet copper, alongside which batteries, glass tubes, and wire tubes were resting. The exhibition was shown in the Landesmuseum Darmstadt, where the work is still located. Also now situated in Darmstadt is Fond III, which was first shown in Galerie Schmela, Düsseldorf, in the year 1969. In an article for the Frankfurter Allgemeine Zeitung, Georg Jappe describes the work as follows: “… nine enormous stacks of felt, each made up of one hundred large gray pieces of felt, give the oppressive impression of a dimly-lit warehouse, where the stored material waits to be used.” In the same article, Jappe quotes Beuys as saying: “I might have begun my work with feelings, but meanwhile ideas have emerged. The idea of the battery was foremost here. The piles of felt … are machines, the copper plate is the conductor. The storage of energy and heat in the felt produces for me a kind of power station, an inert action.” It is exactly this relation of a simple, battery-like block form to energy and action that also propels the program Monodosis.

The indicated relationship between the program Monodosis and the field of fine arts was intensified when its performance was shifted from a concert hall to a gallery space. For Gallery Loris, Berlin, Dell transposed Monodosis into a publicly displayed research work on time and timing in a gallery space. Under the title Mondosis 1–20 min, it was conceptualized and realized from 2007 to 2009 as a series of performances that presented a hybrid between performative lecture, concert, and installative performance. Mondosis 1–20 min was published in 2017 as an artist book, containing texts, notations, and DVDs.

Not only contextually but also musically, Monodosis is framed in a specific way. The conceptual procedure of the playing in the program breaks down the structure of a composition. Within each compositional unit, there are matters left to choice and judgement in real time: matters of rhythm, structural relations, melodic shapes according to fragments being reordered. Thus the playing revolves around compositional cores, splits them up into separate parts and reassembles them in ever-new combinations in what Dell calls non-representational playing. This is about the creation of and working with representations of musical structures in such a way that they – in different degrees – stay open, non-representational. This works in two modes. On one side, the non-representational representation becomes an instigator of the structural playing itself. Playing results in manifold polymetric and polyharmonic juxtapositions, while the inner motif remains concise, transparent, and minimal. On the other side, the non-representational playing allows for the appropriation of strategic procedures of pre-existing compositions. In that respect, the material of Monodosis II includes numerous strategic particles and procedures from the New Music phase of the 1950s until contemporary composed music, transposing and feeding them back to their own distribution scheme: for example, the horizontal Kreuzspiele by Karlheinz Stockhausen sliced in elements that can be played backwards and forwards, harmonic field cut away from Luciano Berio’s Sequenza XI, or György Kurtág’s Microludes redistributed. In that manner, Monodosis is also the preparatory exercise for the large ensemble composition-in-progress by Dell, Das Arbeitende Konzert / The Working Concert. (Revisions I–III of Das Arbeitende Konzert / The Working Concert were published in 2016 by enw records.) Monodosis’s main violation of the principles of notated contemporary music, however, is reflected in its playful, vivid, and bodily intense character. This applies to the rhythmic plasticity, a process of time intensification, as well as to the extended motivic circling and the radical virtuosity. As far as Dell is concerned, the constructive experience of contemporary notated music never represented the utopia of a fixed form. What the experience of contemporary notated music above all signifies for him is an objective extension of musical means to control musical territories, forms, and material. The decisive step forward for him is to resist reading the material as passive and instead to move it into an affective realm.

All in all, Monodosis II unveils, celebrates, and supplements a hymn of the relational reshuffling of fragmentary life. Being a manifesto, it is also a portrait of the one who plays it and the transcendental playing I, with which it gains yet another layer of authorship.

Check the recording Monodosis on enw: 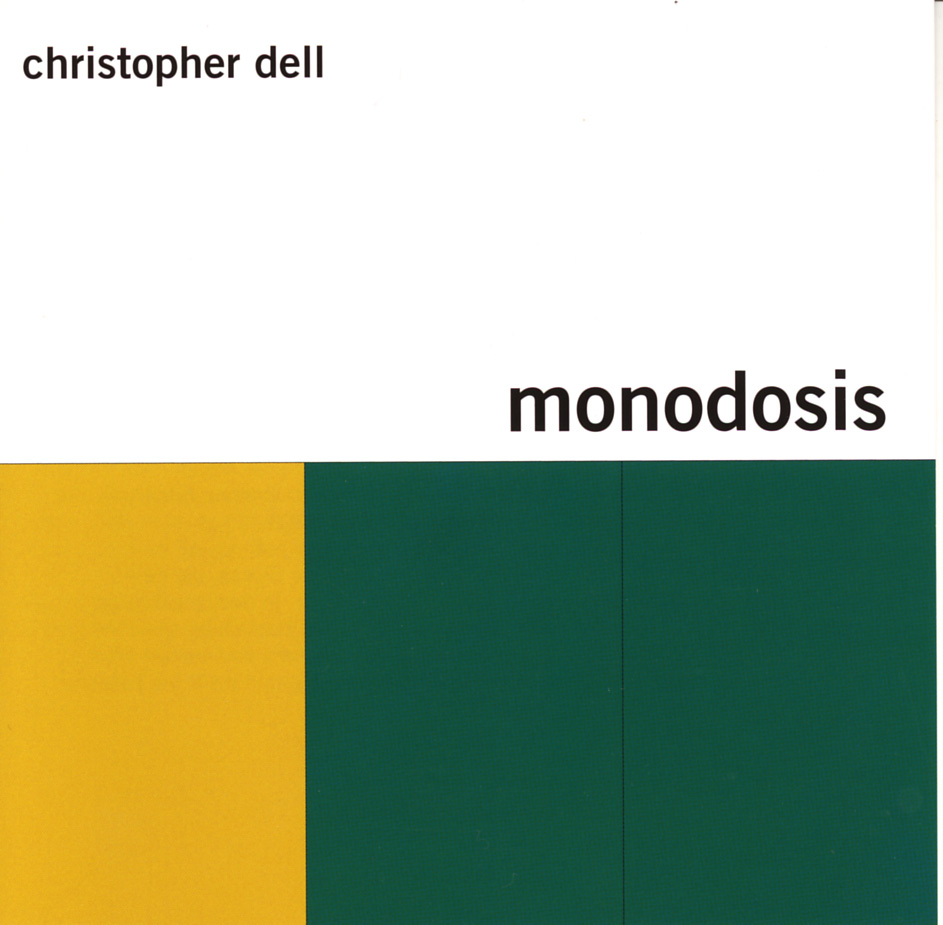 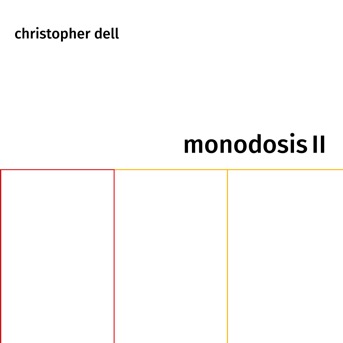 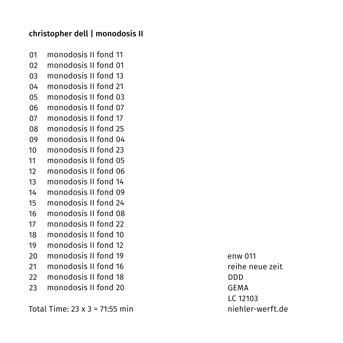