“IMPROVISATION TECHNOLOGY AS MODE OF ANALYZING AND REDESIGNING THE URBAN I

The lecture elaborates on the notion of improvisation in urban design from a specific perspective. In that context improvisation is not intended as an informal, non-planning endeavor but as a way to re-use planning from a situationistperspective. Consequently design modulates to redesign. That means: the aim is not to follow the ideology of creativity and its teleological imperative of creating something new. It is not about tabula rasa but about working constructively with the “as found” ? including its indeterminacy ? in community to reassemble and to draw relationships (between actors and actants). In that process not only improvisation is defined as technology. It also also implies corollarries for the representational modes of design, that unveil their structural potential only from an improvisational perspective: representation changesfrom “Abbild”, from a non-altering identity-form to a performative (re)presentationof structure and relationship as open notation. This notation enables action in order to provoke and produce meaning. The city cannot be grasped as an object but is to be read a performative process, in which we all take part, if we want it or not ? externalisation is over! It is about finding ways to internalize spatial relations, make them public and act from there. 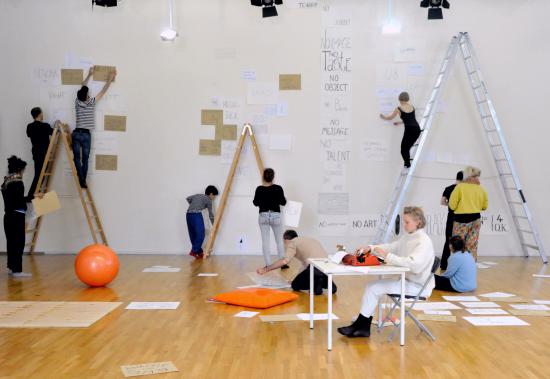