Das Arbeitende Konzert (AK) / The Working Concert is a performative installation work focused on concerts and their representations as creative media, whereby concerts are understood not as neutral frames but as a form of artistic expression and as critical dispositifs or apparatuses. The series of scores and concerts-as-exhibitions under the title AK Revision( x) acts as a retroactive manifesto of generative structures supplying future work with a reservoir of virtual potentialities. The work signaled here is both literal and conceptual. It is literal in reference to the ongoing working through of activating and actualizing the structural material.So far IX Revisions have taken place.

Since 2014 the AK reflects a continuous experimentation of and research on the content and role of the musical practice, its media and its presentation as concert. As performative installation and recherché long durée  the AK presents the procedures of music-making to the general public and to those who are professionally investigating in music, be it from an artistic, communication-related or academic perspective. Interaction, open form and discourse are key notions when it comes to the form and content of the AK. For this reason, Christopher Dell has placed great emphasis on both; inviting musicians from very different backgrounds to the AK and on locating it in different important exhibition places which allows to recontextualize the concert in a cross-disciplinary way. This has made it possible to perform and exhibit significant Revisions of the AK that have been discussed by researchers, journalists, curators, and many other qualified contributors from around the globe. The Revisions were shown at Teatro Garibaldi in Palermo and Künstlerhaus Bethanien, Aedes Network Campus, Aedes Architecture Forum, Gallery 5020 Salzburg, the Loft, Cologne and Emil Berliner Studios in Berlin, all of which allowed for a working process antithetical to the ingrained characteristics associated with concert institutions. The configuration of these concerts as exhibitions involved rethinking all the various aspects of the concert as installation, exhibition, publication, public event, performance, marketing, public signage, and audience reception.

To the extent that the AK, on the one hand, refers to and transposes or deconstructs other musical works, it exposes and thematizes, on the other, the mediality of the work itself as display, be it installation, concert, or exhibition. In its sparse visualization and its minimal, condensed structure, AK is Christopher Dell’s strongest model and template for subsequent work in different media so far.

In collaboration with Spector Books Leipzig, the AK ’s Revisions I–VII and the process of their creation have been relocated to the book space. The book contains scores, documentary material, photographs, and concept texts that have driven and/or led to the AK in the oeuvre of Christopher Dell. 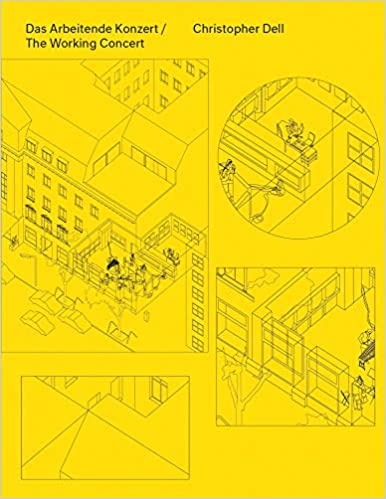 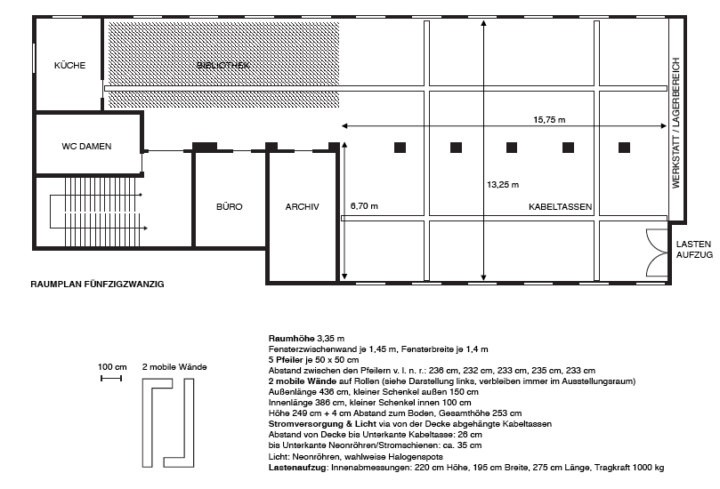 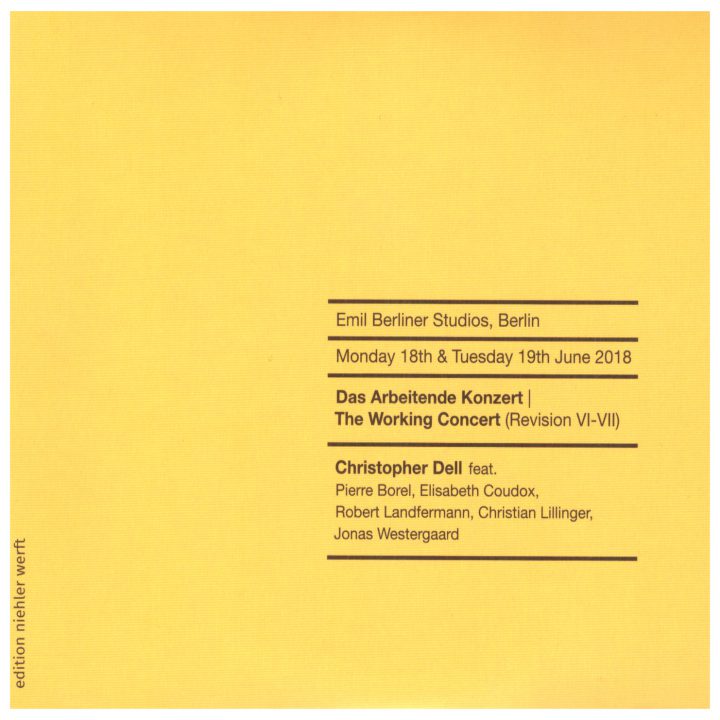 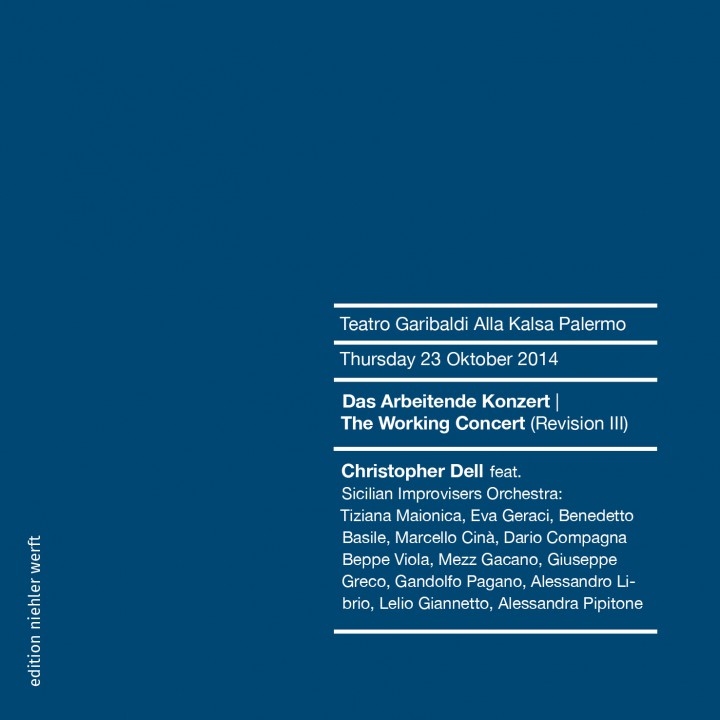 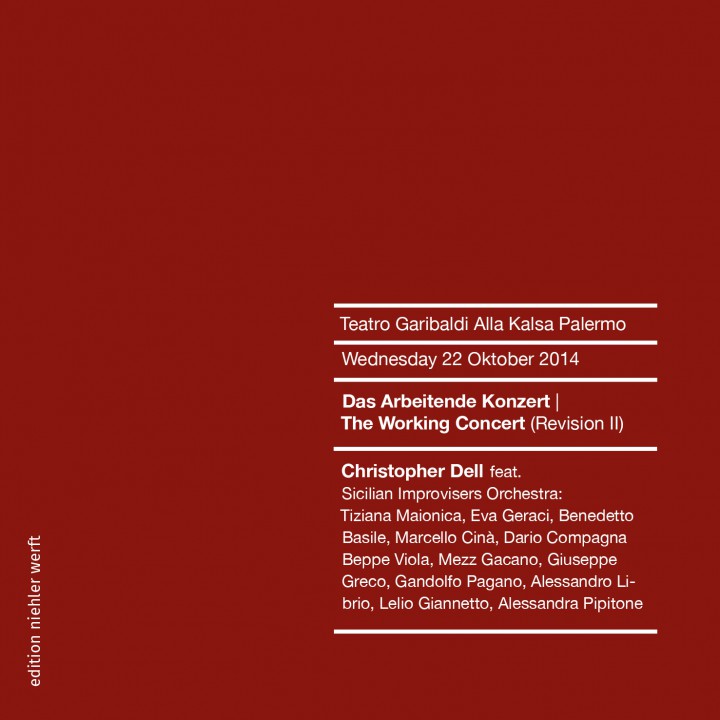 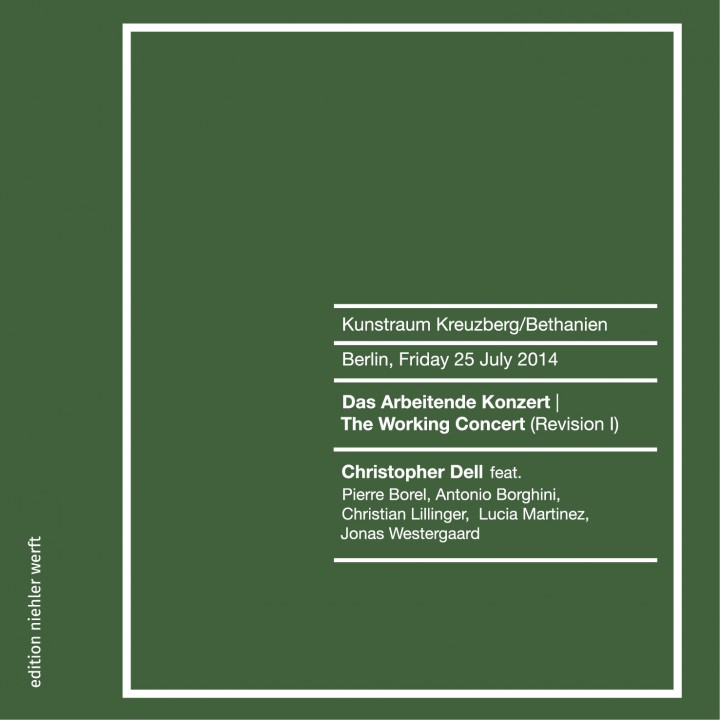 The conceptual work of my work cycle “Das Arbeitende Konzert/The Working Concert” (AK) focuses, on the one hand, on the further development of a specific compositional grammar, on the other hand, on the thematisation of performance practices and their specific spatialisations.

The latter aspect, the spatialisation of musical action, is of particular current importance, also in view of the consequences of the pandemic for the concert business. My source material here is my book publication “Das Arbeitende Konzert/The Working Concert”, which was published by spector books Leipzig in June 2020. Where this book combines music and spatial notation, it examines the lines of interrelation between musical and spatial action as well as between the concert and its spatial situatedness. This investigation is rooted in AK’s interventionist performance practice, which, as a performative installation, turns every performance into a laboratory situation. As concert, construction and rehearsal converge, a multi-scale dispositif of showing emerges that makes musical practice visible, negotiable and discursive in a new way.

The aspect of the further development of a specific compositional grammar involves a long-term work. In 2019, I was able to conduct research in the archives of the Paul Sacher Fondation on the occasion of a studio scholarship from the Fondation Bartels in Basel. The result is a collection of notes on pre-score material by Earle Brown, Roman Haubenstock-Ramati, Pierre Boulez, Luciano Berio and Bruno Maderna. In view of this, part of the further work consists of investing time in the processing of the note material in order to take the next step in the conceptual and practical contouring of the group of works.

What I am striving for in terms of artistic research is the medialisation of music in spatial and temporal contexts. Based on this, AK – like most of my work groups – is conceived as a series in which musical processes and strategies are portrayed over certain fixed periods of time and at certain temporal intervals. This method of the cumulative series enables me to work in a multi-scale manner, also in terms of time. What is relevant here – as the forced pause of the pandemic, for example, most impressively demonstrated – is not only what the performances or their recordings show, but also what is articulated in the temporal cuts and jumps in between, i.e. in the temporal cuts and jumps between the performances.

Within AK’s process, it is not only about making visible drastic changes that occur over time, but also the subtlest movements from one moment to the next. An essential aspect of this is seriality. So far, 9 revisions of the format have been performed. While I have conceptualised each performance in terms of the particular spatial situation, the essence of the artistic process emerges from the series. Thus AK stands for a fundamental scepticism towards the claim of being able to adequately represent the specificity of a musical procedure with individual concerts. For me, the musical structure is revealed neither in an idealised staging of the concert nor in the specificity of a particular moment. What I strive for, on the contrary, is to document the becoming of music, to show its changing perspectives on itself and its changing form.